June 15 has been established as the World Elder Abuse Awareness Day to raise public awareness of the abuse suffered by older people. We have found three people who have devoted themselves to caring for elderly people with dementia and what they have to say speaks to the hearts of those who have seen their loved ones plunge into the darkness of the disease:

“I think that all people need a hug, a caress, some sweet talk. Like a flower needs water to bloom and be alive, so human beings need care and company as they grow older. Because that is their water. And they cannot live without it. Otherwise, they dry up inside, as they are deprived of love and human contact. And that is often something that we don’t give to the elderly.”

When you speak with Evangelia Angelidou, the person who thought of and founded the Greek Association for Alzheimer’s Disease and Related Disorders of Chalkida and the “Agia Eirini” Day Centre, you quickly realize that every word that she addresses to patients with dementia and their carers is steeped in compassion. For about twelve years, she was herself a carer of her mother who suffered from Alzheimer’s, which prompted her to create the aforementioned care structures.

“The biggest difficulty for a carer, in my opinion, is to face reality itself. It’s very difficult for Alzheimer’s to happen to someone close to you, to someone you love. Roles that have been established for decades are changing. You cease to be the child and you become the parent of the person you care for. Until that moment, your mother was the one who took care of you. And suddenly, that person is no longer the same. You can’t communicate with them.”

For Mrs. Angelidou, her mother’s illness triggered a succession of life-changing developments. “When my mother got sick in 2003, I knew I wanted to be there for her and to take care of her. In 2009, I attended the Panhellenic Conference for Alzheimer’s in Thessaloniki. When it was over, I was already thinking of going back to Chalkida to set up a small structure that could accommodate some persons, even as few 3 or 4 people, so that I could help my mother become socially active. I wanted her to finally get in touch with other people. Until then, in 2009, I had worked as an insurance agent. After 2010, I started studying counselling in a Humanities College, eventually obtaining a degree that was recognised in Greece, from a University in Scotland. I then did a Master’s degree and now I am studying for yet another Master’s degree in psychotherapy. My life changed dramatically and today I am running my private surgery as a psychotherapist. I never thought I’d be practicing this profession. I hadn’t thought that I would create an organisation and a Day Centre that helps people every day. My mum died in 2015 and until the last months of her life she was going to “school”, as she used to say. She understood that it had been founded by her daughter. She felt really, really good about it. The weird thing was that although her brain wasn’t registering anything, it did register this. Eventually, my mum showed me that I have to make the Association and the Day Centre a vision of my own and to keep it alive. And that’s what happened. In fact, the “Agia Eirini” has been named after her.”

Take care of the carer…

One of the most basic issues, however, faced by the carer of a patient with dementia is not only the time and effort required (which is by no means negligible) for their loved one to be functional but the social exclusion that makes its appearance together with the disease and seems to be inevitable. “As soon as the disease sets in, the doors close. Even people that were part of your everyday life, such as family and friends, are slowly distancing themselves. Either because they feel sorry or because they don’t have the time, or because they’re bored by the patient’s repetitive speech pattern or the carer’s whining about having such a hard time. There are many reasons why this happens. And very quickly, the patient’s family find themselves in isolation.” The strong psychological pressure, the loneliness and the disruption of everything that had been taken as a given in the carer’s life up to then, could lead to extreme situations, if the required help is not available to the carer as well. 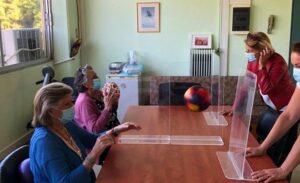 “A carer may become abusive towards a patient with dementia. Not just because the carer doesn’t know how to treat the patient and meet his/her needs. At some time during this long process, frustrations may surface or the carer’s psychological state may become so overburdened as to make him/her abusive, even towards his/her parent or partner,” says Evangelia Angelidou, who has come across such examples during the 10+ years she is actively involved in helping people with dementia. It is exactly at this point that non-profit organizations such as the Greek Association for Alzheimer’s Disease and Related Disorders of Chalkida come to offer their valuable help, filling the gaps created by the shortcomings of state welfare. “First of all, we approach the carer and we tell suggest to them where to turn for seeking help. We inform them of the very few state benefits and services they may contact.

The most important thing, however, is psychological support. At Alzheimer Chalkida, we have the “Agia Eirini” Day Centre, which for carers and patients alike is a place where they can find they can communicate with.” In fact, since April 2021, Alzheimer Chalkida, in collaboration with the EPIONI Greek Carers Network, has been implementing the project “Supporting golden age’s human rights: Defending human rights for elderly people (65+) with dementia and depression”. Implemented under the Active citizens fund programme with Bodossaki Foundation as Fund Operator, the project involves information and capacity building actions for public officials in the Regional Units of Phthiotida and Evia in Central Greece.

The invisible heroes of everyday life

Mrs Angelidou is not the only carer who saw this uneven fight against Alzheimer’s disease as an opportunity to help her loved one, bringing to the surface the endless reserves of inner strength hiding within us. 79-year-old Nikos Athanassiadis is a very special case of a man. When he found out that his ex-wife was suffering from Alzheimer’s, he volunteered to become her carer. The two of them now live together in a house in the village of Drossia, in Evia. “I am 79 years old and the wife’s 82. We’ve known each other for a very long time, and that helps. But et from what I see, this disease is progressing mostly negatively. I don’t see how there can be a happy ending…” 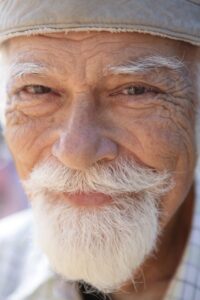 Although the beginning of the discussion with him reveals the huge difficulties that a caregiver is facing, the tone of Mr Athanassiadis’ voice exudes serenity and calmness. He speaks in a manner that shows a man of unique insight. In the space of just a few minutes, he talks to you about yoga, philosophy, Shakespeare, Hegel, Buddhism, his thoughts always focusing on humanism…

“From a philosophical point of view, the first thing the State should do is to prepare its future –in other words, the children– and to care for its past, in other words, for the elderly. That’s why more emphasis should be given to how people age.”

Although he is close to his 80th birthday, he sees the illness and care of his ex-wife as an opportunity to defeat loneliness, by generously offering love. “I didn’t want to live alone. Because I like being alone, but always together with someone else. So, we started living together with my ex-wife in the village of Drossia, in Evia. For myself, I feel that in this way I am fulfilling the promise made in our original marriage ceremony in England, where we vowed to be together “in sickness and in health”.

Although the way in which he lives his life is perfectly balanced and positive, he does not hide that the daily routine of living with a person suffering from Alzheimer’s is not easy.

“The carer should not forget that the primary purpose of every day is to provide care. The carer’s life is part of the life of the person he cares for.”

And this reality becomes more difficult when you know in advance that every new day to come will usually be more difficult than the one before. “Pretty much what I see with the disease is that things get out of proportion, that the balance is lost.”

He, of course, does yoga to keep his mind and body in harmony, while he has already suggested to the Day Centre in Chalkida that similar classes should also be launched for carers. “There is a lot of work to be done, focusing on the carers and their peace of mind. It is the only way in order for the patients to be well, too” he says. And what does he have to say about him and the experience he is going through at 79 years of age?

“I have always in my mind the words of Polonius in ‘Hamlet’: ‘This above all: to thine own self be true.’ I feel lucky that I can be true to myself…”

A.B. is 27 years old and unemployed. Almost all of her life revolves around caring for her father who suffers from hydrocephalus, which evolved into a form of dementia, which doctors are trying to fight with medication. “There is a big difference between our case of dementia and that of Alzheimer’s. My father is likely to be helped by medication and to do better, whereas for Alzheimer’s this is not the case – at least not to this day. Of course, for the time being he certainly has problems with his memory and functionality.” Her choice to sacrifice things that women at her age enjoy, in order to take care of her father, was a fully conscious one. “I had the time to do it, because I’m not working. Moreover, he is my dad… I know what buttons to press in order to communicate with him. I record every day what we do and how we do it. No one else could have taken care of him the way I do. Because in addition to helping a person in need, there is also the emotional attachment to my dad.”

A.B. acknowledges that caring for her father affects her daily life and the time she has for herself, but chooses to see the whole situation in a positive light. “I believe that it has to do with how you will deal with at a personal level, as a human being. Whether you will look at it from a positive point of view or whether caring for a person with dementia will swallow you up. The first certainly depends on accepting of the situation.

You have to realise that it is you who need to enter the patient’s world – not wait for the patient to become able to perceive your world.”

In other words, you must have empathy, as Mrs Angelidou says: “Empathy is something that we need to study at an early age. We need to be sensitive to everything and, by extension, to the elderly.”